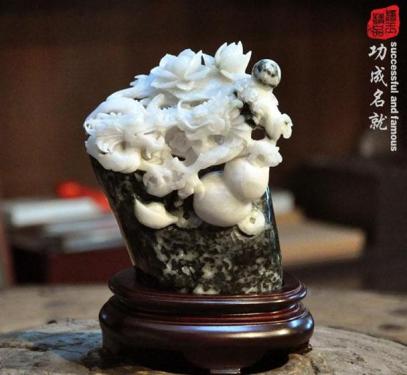 Dushan Jade is named after Dushan produced in the northern suburbs of Nanyang City, Henan Province. It is also known as Nanyang Jade. It is also referred to as Duyu. The Dushan jade texture is delicate, the color is very bright, the hardness is very high, and it is full of **. It looks very close to jadeite, so many foreign scholars call it Nanyang jadeite. Dushan Jade is one of the four famous ancient jades in ancient China. It has been recorded in many ancient books. The Taoist Yuan of the Northern Wei Dynasty contained the â€œSutra Notes on Waterâ€: â€œNanyang has Yushan Mountain, and Shanshan has jasperâ€; Southern Dynasties Tao Hongjing said: â€œGood. Yu, Lam Tin and Nanyang."

The use and exploitation of Dushan Jade has a long history. In the Yangshao cultural site of the Neolithic Age in the Nanyang area, jade shovels and jade pots made of Dushan jade materials were unearthed. In the 40th century, the ancient scholar Li Ji measured the proportion and hardness of the 62 pieces of jade unearthed in Yinxu and other areas, confirming that Dushan jade existed in the late Shang Dynasty. Dushan jade products were also found in the Shang Dynasty Women's Tombs excavated in 1976. The Ontario Museum of Canada also collects a Shang Dynasty jade bull (Figure 1), also made by Dushan Jade. Located in the North Sea Mission City in Beijing, the Yuan Dynasty giant jade sculpture â€œLushan Dayuhaiâ€ (Figure 2) is the largest piece of ancient Dushan jade works.

Dushan jade is a kind of altered gabbro. The main minerals are plagioclase, lanthanum stone, pyroxenite, and mica mica. The color of Dushan jade is more complex, with white, green, yellow, purple, red, black, and miscellaneous colors. Usually a jade material can appear at the same time 2 to 3 or more colors, hardness is 6-6.5, The proportion is 2.73-3.18. Dushan jade is fine in texture, but uneven, often with impurities, white bars, and cracks. Each color is intertwined and mixed.

Dushan jade is divided by color and there are the following 8 varieties:

1: Green Dushan jade: including green, grayish green, blue-green, yellow-green, often accompanied by white Dushan jade, uneven color distribution, mostly irregular bands, filamentous or lumps distribution. Transparency varies from semi-transparent to opaque, with translucent blue-green jade as the best variety of Dushan jade, and it is also known in business as â€œsky blue jadeâ€ or â€œnanyang jadeâ€. In recent years, the output of this high-quality variety has gradually decreased, and most of them are gray-green opaque green Dushan jade. Therefore, this "sky blue jade" is currently the most popular investment in the single jade collection market, especially a kind of green dushan jade called "daytime blue", white jadeite, translucent, in Dushan jade. The highest price in China is the first choice for many collectors.

2: Red Dushan Jade: often expressed as pink or hibiscus color, also known as "Fu Rong jade." This kind of jade usually has different shades of color. It looks generally slightly transparent and opaque. It is in transitional relationship with Baidushan jade. Because of the low output of such jade, this type of jade is also one of the top choices for collectors.

3: Baidushan jade: generally white, milky white, often translucent to slightly transparent or opaque, according to the transparency and texture of different water and white, white, dry white three titles, of which the best water permeability is white , The most has the value of the collection investment. Baidushan jade accounts for about 10% of the total output of Dushan jade.

4: Huang Dushan jade: yellow or brownish yellow of different depths, often translucent distribution, which often has white or brown clumps, and with its transitional color, has a certain collection of investment value.

5: Dushan Dushan Jade: It is dark brown, grayish-brown, yellow-brown, with uneven shades. This type of jade is often translucent and is often in a transitional state with grayish green and green Dushan jade. Among them, the light color is relatively good, and the brownish Dushan jade collection with too dark color is of little value.

7: Black Dushan Jade: Also known as Dushan Moyu, black, dark green, opaque, coarse particles, often massive, lumps or dots, accompanied by Baidushan jade, this species is Dushan jade The worst breed in the middle, unless it is a particularly good craftsmanship, there is not much value in the collection.

8: variegated Dushan Jade: The above two or more colors are usually present on the same specimen or finished product, especially four to five or more often appear on some of the larger Dushan jade raw materials or carved pieces. Multi-color varieties, such as green, white, brown, cyan, and ink, are immersed in each other or gradually transitioned on the same block. Even at the interface less than 1 cm, brown, green and white appear. Color coexist, this complex color combination and distribution features have important guiding significance for the identification of Dushan jade. Variegated Dushan Jade is the most common species in Dushan Jade, accounting for more than 50% of the total reserves.