But when talking about Liu Ruihui, the founder of Freebird, there are few people who know him. Because he was very unhappy students Zhang Yang, so in his 26 years of garment industry history, for his personal publicity, almost no one. Management work with him, the evaluation of his actions are: clean, neat, clear. Evaluation of his dress is: simple, restrained, taste. Friends of his evaluation is: love home, love Chinese culture. 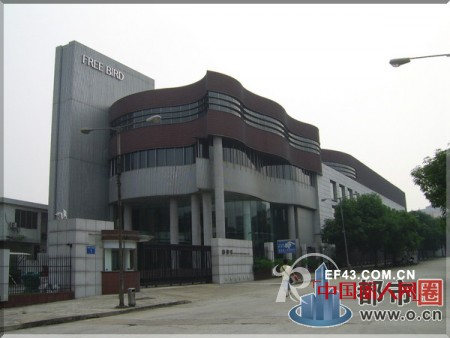 Something must be done

In 1984, Liu Ruihui set up a garment factory by itself. According to the policies of the time, engaging in foreign trade or planned economic mode, the manufacturing enterprises did not have the right of import and export. They all made special offers to Guangdong Textile Import and Export Corporation and Guangzhou Textile Import and Export Company The export-oriented state-owned company Nathan did because only state-owned trading companies such as Provincial Textile and Textile City had the import and export quotas for garments. Processing plants can only do processing to Hong Kong enterprises. Do the United States, Hong Kong's OEM products, such as Apple jeans.

His garment factory is linked to the township enterprises in Dagang, doing is also processing. Once, he traveled with the provincial delegation to study abroad, changing his idea of â€‹â€‹starting a business. He saw the US market selling an apple-brand jeans for seventy to eighty US dollars (equivalent to 600-700 yuan at the time). The same raw materials, the same process, the same finished product, there is no Apple logo affixed to the logo, in the country can only sell 45 yuan. He asked himself, these products are from China, from their fellow hands, and what did we get? A little processing fee! Why not do your own brand? Why should always make their own products because there is no brand and become food stalls, spread the goods, lose its due value and benefits?

In 1995, Liu Ruihui's own brand - free bird casual clothing came into being, free bird store was born, the first generation of renovated image available; the same year the construction of free bird building, free bird invited to Europe, South Korea, Hong Kong and other extremely sensitive The trend of tactile and rich experience in the production of designers to establish their leading position in casual wear. The Rui Hing garment factory owned by Liu Ruihui, Huida Fashion Co., Ltd., Freebird Garments Co., Ltd. and Hong Kong Tiangong International Group and other subsidiaries, enough to support the development of the scale of free birds, so that the Free Bird brand traveled the country.

At this point, Hong Kong's apparel brands, such as Liu Ruihui, are expected to enter the domestic market in succession and by virtue of their strong financing capability in the securities market, they have entered major shopping centers and specialty stores in large and medium-sized cities nationwide in just a few years. At the same time, the domestic brands are also beginning to emerge constantly. The apparel market has shifted from a sole operation to a chain-scale sales. The competition among brands has also been expanded from quality competition and price competition to service competition, scale competition, image competition and strength competition A series of competitive categories.

Free birds began to fly in such a competition. 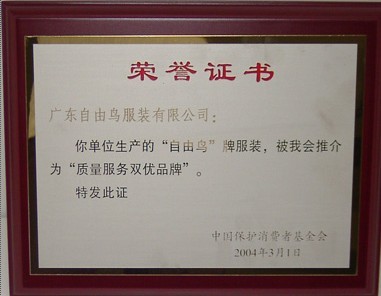 In the next few years, Freebird not only secured a place in the apparel brand market, it was appraised as a famous trademark in Guangzhou in 2001, a famous trademark in Guangdong Province in 2003, and top ten in Guangzhou in 2002, 2004 and 2010 Brand apparel; 2004 was also rated as quality, service Shuangyou brand and the top 100 garment enterprises in Guangdong, Guangdong garment advantage enterprises in 2005 by the state Mianjian products business; 2010 clothing brand innovation enterprises. 2006 and 2013 continue to recognize Guangdong famous brand;

Some roads must go

For example, to register a trademark, you did not expect a protracted war to fight for three years, plus a huge investment of more than 4 million yuan. If you do not want to go, But it happened. "

That is 1990. Because Liu Ruihui's clothes are so cool and well done, the products are sold very hot and have set a very good reputation among consumers. At that time, no one in Panyu can surpass them. Liu Ruihui decided to put their own clothing into the big department store in Guangzhou. At that time, Guangzhou's new Daxin, Guangzhou Department Store, the South Building, are all well-known department stores. However, those who stationed in the mall, you need a business license, tax registration, the product must also have a registered trademark.

Since 2007, the entire casual clothing profit continued to decline, and sometimes even only a few percent. National leisure brand prices go up. However, in recent years, Freebird has been focusing on the transformation and upgrading. To assess the situation, turn our attention to the urban white-collar elite, began to design their own fashion, to create their own fashion, in order to respond quickly to market requirements, so that free birds quickly become the leading fashion brand in China.